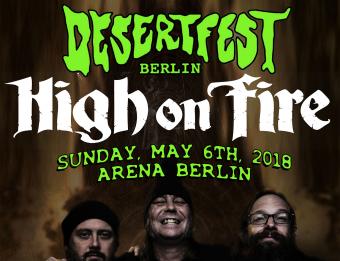 Desert rockers! It's about time to unveil the first bunch of bands for next year's Desertfest Berlin, which will take place between May 4th - 6th 2018 at the ARENA BERLIN!

Ladies & gentlemen, breath in deep, as this first line-up news will come to revive your spirit: We're more than thrilled to announce that the Spacelord, Dave Wyndorf will hit our main stage in 2018. MONSTER MAGNET comes as the first headliner we can proudly present to you today!
With their hazed heavy sound on groundbreaking records such as 'Tab', 'Spine Of God', 'Dopes To Infinity' or 'Powertrip', MONSTER MAGNET transformed themselves into the Olympus of modern power rock and became the godfathers of psychedelic and stoner rock.

More big news are coming ahead, Desert Rockers! We are extremely happy that LA´s legendary psych stoner outfit NEBULA will celebrate their Re Union at our stages!!! Formed in 1997 by Fu Manchu member Eddie Glass, NEBULA have been on indefinite hiatus since early 2010 but have not broken up. We are much looking forward to welcome Eddy Glass and his gang at Desertfest Berlin 2018!

Oh and for all of you dear Sludge rockers, don't worry we haven't forgot about you. What about a heavy dose of mighty EYE HATE GOD in 2018? Yes, you have heard right. The kings of Sludge from New Orleans, who emerged from the Nola Metal scene since 1988 belong to the most influencing bands. Heavy, detuned, and bluesy guitar riffs, combined with walls of feedback and tortured vocals to create a harsh misantrophic vibe, EYE HATE GOD will make sure to take over our new home at the ARENA BERLIN!

Next on the bill we're very proud to inform you, that the queen of darkness JEX THOTH will bring the Doom and Psychedelic Rock as its finest to Desertfest Berlin. Fronted by the eponymous Ms. Jessica Thoth, the Wisconsin- based 5 piece band delivers delicate tones that are soaked in mystery and aura as well as generate astounding depth atop a musical landscape of intelligently constructed Sabbath-ian blues vibes and fuzzy distortion.

Athen's rumbling heavy rock machine PLANET OF ZEUS will set the stage on fire with their outstanding live perfomance. Last but not least in this announcement we are welcoming THE NECROMANCERS! This young band from France raised a lot of attention with the release of their outstanding debut album a few weeks ago.

We hope you all like this first bunch of bands and be sure there are many more exciting acts and news to follow soon!  In 2018 we will break new grounds and preparing for an unforgettable Desertfest Berlin experience. Join us in the capital of the almighty riff – DESERTFEST BERLIN 2018!