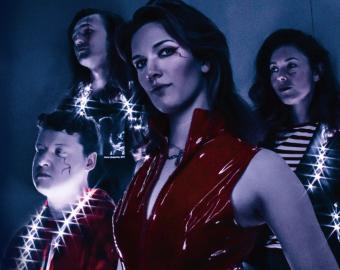 Psychedelic space rock band, Flight Attendant, belongs to that unique breed of bands made in Nashville. It takes nothing less than a sonic unicorn to stand out in this town. And that’s exactly what the 4 piece band is: a fascinating ovni. “I think you could find some of our future tracks on ISS Radio in the year 2050” says frontwoman, Karalyne Winegarner of the band’s sound.

Blending rock with pop hooks and light synth textures, they fearlessly bring together influences that span from Kings of Leon to Vivaldi and Lana Del Rey. And with their ecstatic live performances and hypnotic melodies, they have already established themselves as a local fans’ favorite ready for the national stage.