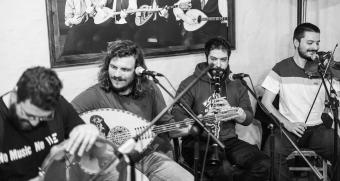 Gidiki is a band based in Thessaloniki, Greece. It was formed in 2014 and since that time it has given numerous gigs in Thessaloniki and many shows all around Greece. References to traditional music and rembetiko are interwoven with those of modern creation.
In 2014 Tasos Kofodimos, together with Konstantinos Lazos, Konstantis Papakonstantinou and Christos Danas started to experiment on several traditional songs from all around Greece, starting to develope their own approach in reforming traditional vibes and as a result they started rehearshing in a professional level and produce their own and unique performing style which was unexpectably welcomed by the domestic audience and in a short while they managed to be able to address to foreign stages. As the members of the band tend to be multi instrumentalists they use different instruments (Greek lute, bouzouki, clarinet, Greek bagpipe, guitar, violin, percussion) giving a variety of sounds that can cover a huge range of traditional Greek songs, merging vibes from different Greek regions.
The last two years they have visited countries such as Germany and France and they are about to visit them again in the near future adding also some new destinations such as the United Kingdom, Czech Republic, Austria, Spain and Cyprus.
It is worth mentioning that they already have cooperated with well known artists such as Thanassis Papakonstantinou, Matoula Zamani, Hainides, Villagers of Ioannina City, Spyros Grammenos, Vaso Vasileidou and others.
The lead singer of the band Tasos Kofodimos together with Konstantis Papakonstantinou, are also members of the band Largo and both of them have their own musical route through cinematic soundtracks, documentaries etc. Konstantinos Lazos is also a member of the Greek rock band named Villagers of Ioannina City (V.I.C) and he also has cooperate with bands like Largo, Sleeping Pillow, Baildsa , TAU etc. Thodoris Sioutis also, has a great classical route so far and he is said to become a very promising musician.
A few words about Greek traditional music In a small country like Greece, it is memorable the variety of different music kinds in existence. From village to village, island to island, really big differences are observed through the traditional songs . Differences as about the rhythm, the instruments, the harmonies and the scales. These musical idioms have no author and have nothing to do with any intellectual properties. There are anonymous creations that came out through the need of the people to joy, to have fun, to dance, to lament. They traveled through ages as a heritage of farmers, builders, immigrants, just by listening (at least at the beginning), usually in the local coffeehouses and the local feasts in order to reach our ears as a heritage from the ages of our grandfathers. Its basic subject matters are Immigration, Death, Love and Marriage.